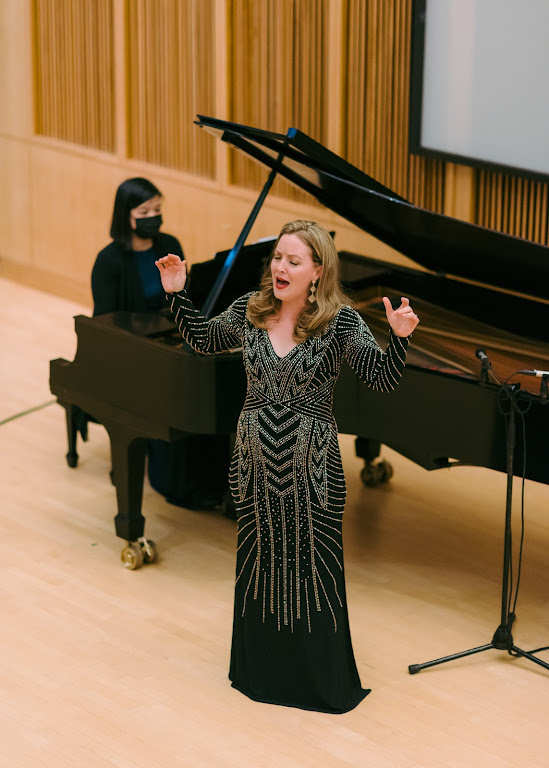 "Her singing was doubly impressive, given the fact that...Ms. Whyte had to sing this demanding—at times almost spinto—role two nights running. ...she sang beautifully and her vocal acting (as well as physical) was outstanding. Her sad reassurances to Don Ottavio that she loves him ('Non mi dir, bell’idol mio') were poignantly sung."

"As youthful, fresh, and optimistic as Whyte appeared, her glamorous, vibrato-rich voice spoke of a vocally mature woman grounded in heartbreak. The emotional import of her beautiful instrument seemed ideal for her first mournful solo in the “Spanische Liebeslieder.”

"The Berg songs were highlights. Whyte…was as confident and present as if she’d planned this concert for months, her voice shimmering...Whyte also has the storytelling sensibility of a natural actress. Her open face offers an emotional subtext to every line of text."

"Canadian Soprano Katherine Whyte made a stunning debut in Atlanta Opera's "Orfeo ed Euridice" Nov. 14, more than holding her own in a cast that included the inimitable American countertenor, David Daniels, as Orfeo and mezzo Deanne Meek as Amore. A compelling vocal and dramatic presence, Whyte was particularly affecting in Euridice's moments of incomprehension while being led out of the underworld by her seemingly indifferent husband."

"Katherine Whyte was a delicious Iphis, with a beautiful voice and  a real discovery for this kind of role".

"Pamina was sung by Katherine Whyte in one of the memorable outings of the 2010-11 season so far. Her lithe soprano caressed the notes and her second act aria on her mortality was so beautifully shaded with plangent emotion that it was worth an encore."

"Whyte's singing was very youthful and very beautiful and her looks are a total match to the lithe, compassionate and understanding person that she is trying to portray."

"Katherine Whyte, as the countess, puts her pure and soaring soprano to particularly good use."

"Katherine Whyte, as the countess, puts her pure and soaring soprano to particularly good use."

"Ms. Whyte’s Countess Rosina was surprisingly cool and elegant.  Her phrasing was impeccable, her honey like soprano voice conveying considerable emotional depth and understanding as she expressed again and again the quiet sorrow of a faithful wife who still genuinely loves her philandering husband. Her quiet, gently emotional delivery of Mozart’s heartbreaking yet ravishing “Dove sono i bei momenti” grounded the opera’s largely comic tone in the genuine spiritual impulse that provides it with its real heart and soul."